Two of them were left out all winter, but the other two seem to be sound.

Beyond a doubt truth bears the same relation to falsehood as light to darkness. – Leonardo da Vinci

Just as the everyday world is periodically transformed by a fall of snow, so too the suburbs are transformed each and every night.

Alert in the dark, our senses are heightened, sensitive to movement and sound. From the shadowy darkness a fox ambles non chalantly across a road before disappearing behind a bush in someones front garden. The paper fan of moth wings beat against the plastic shell of a street lamp, one of hundreds of thousands all over the city, whose orange glow lights the cloudy underside of an overcast sky. At night as I walk, pondering the truth of things, the empty streets appear almost normal.

Knowing your own darkness is the best method for dealing with the darknesses of other people. – Carl Jung

Light thinks it travels faster than anything but it is wrong. No matter how fast light travels, it finds the darkness has always got there first, and is waiting for it.― Terry Pratchett, Reaper Man

Modern society depends on light in many forms; from high-intensity natural daylight and artificial lighting, to the glow of TV screens, computers, tablets, smartphones, and games. Light is so ubiquitous – and generally travels unseen (except, for instance, in fog) – that we often take it for granted.
We probably have more light than we need, while people are generally unaware of the amount of light they are exposed to, and of its economic and environmental costs.
Over recent decades…use of energy for lighting has been increasing and science has realized light has a significant influence on our health, he pointed out – think seasonal affective disorder, or SAD – as well as [how light is] affecting plants, animals, and insects.
A citizen science survey has been designed to obtain the first national data on the amount of night light, its influence on our sleeping patterns and local ecology, and also the general public’s perceptions of the night-time sky.
https://www.irishtimes.com/news/science/only-5-per-cent-of-ireland-s-night-skies-are-free-from-artificial-light-says-expert-1.3419673

At Jesse’s suggestion, at James’s instigation both, first Jesse, then James, in penumbra urinated, their sides contiguous, their organs of micturition reciprocally rendered invisible by manual circumposition, their gazes, first Jesse’s, then James’s, elevated to the projected luminous and semiluminous shadow.

I will not tell you where it is.

a connection, if I can tell

you are one of us

who find it ours.

You will not find it otherwise.

the departing boat
clinging to the anchor
strands of seaweed

From Connemara, or the Moher clifftop,

Where the land ends with a sheer drop,

You can see three stepping stones out of Europe.

Against the winds’ and the waves’s explosion.

That Aran Islands are all awash.

And on Galway Bay, between shore and pier,

The ferry plunges to Inis Oírr.

The iconic Plassey shipwreck is known all over the world.  On the island for the past 50 years, this blow-in has become an integral part of the community on Inis Oírr. She features in the opening credits of the popular comedy series Father Ted. 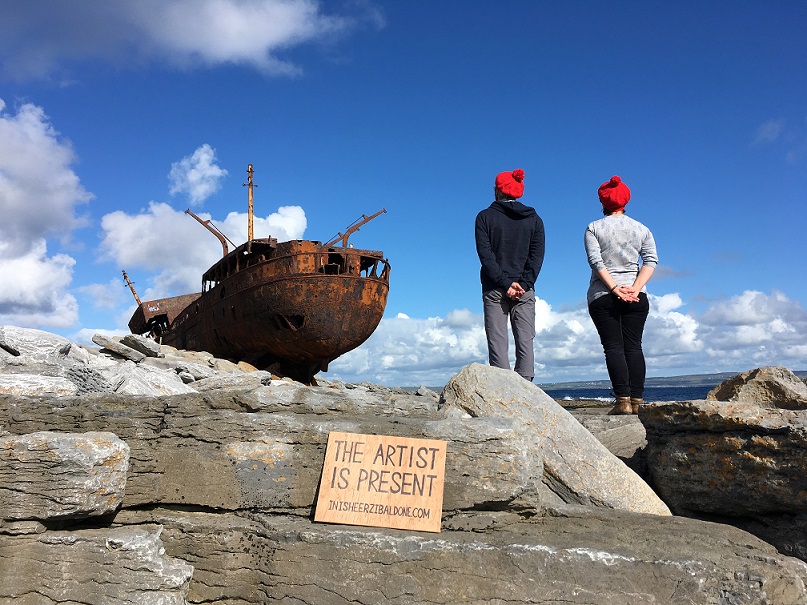 The Plassey was carrying cargo of whiskey, stained glass, and yarn when she was caught in a severe storm and struck Finnis Rock on Inis Oírr in March 1960. The crew was rescued from the ship by the Inisheer Rocket Crew. Two weeks later a second storm tossed the ship onto the rocky beach. The day the ship washed ashore was like Christmas on the island- all cargo that was salvageable was claimed. Is it true that the first flush toilets on the island were salvaged from the ship?

Mike Tobin of the Plassey crew was back as the Guest of Honour on Inis Oírr for a special night in Aras Éanna in 2010 – the 50th anniversary of the shipwreck. Mike was pleased to see some of his rescue team, including Ruairi O’Conghaile from Tigh Ruairi’s pub and guesthouse.

“About 1954 was my first time on her,” recalled Mike. “It’s kind of sad to be inside in her like this, though.  I was very found of the ‘oul Plassey, because at that stage of my young career at sea, she went to very exotic places. She was in Italy; she was in the Canary Islands, Greece, Iceland, Angora and South Africa. She went from Helsinki over to Leningrad – at that time, its St Petersburg now. We never thought she’d end up in Inis Oírr of all places… but she’s there now…”

Mike brought the Plassey to life with his stories from the night she went down.  “I remember the 8th of March, 1960 like it was yesterday”, said Mike. “We were too far to the north of our course, and closer to the island than we should have been, but we didn’t realise it in the bad night and the wind. We hit the Finnish Rock initially at 10 past 5 in the morning.”

The Plassey’s flare lit up the sky and the islanders were alerted to the danger and immediately ran to the scene with the rescue equipment.

“The first we saw of people on the island was around a quarter to 8 – daybreak, we were very happy to see them!  They had only 3 rockets [to launch the ropes for the Breeches Buoy], they fired the first 2 but the wind was so bad it took them away, and when they fired the next rocket it stuck!  Only for that, that would have went as well, because of the way the wind was blowing.”

Thanks to the islanders’ courage and bravery, the entire crew was brought to shore safely using Breeches Buoy to hoist them in, one man at a time.

“Later, at the tail end of some hurricane, the Plassey was lifted bodily from the position she was in, and shoved up there beyond the hide tide in one fell swoop,” Mike continued. “To think that she was lifted from over there, and she full of water, and pushed up there, it would tell you the force of the seas that was around here at the time.”

Mike was asked to demonstrate how to use the Breeches Buoy.  He had to step into the leggings part which is attached to a lifebuoy. “Well I tell ya, the wind was up me! You had to go over the side of the ship, at the bow, and you went straight down into the water, and you were being turned this way and that way, and then your legs were hitting close to the rocks and then you were going over and under… but that’s how we got out!”

“Were you frightened, Mike?” someone asked.  “Yes”, said Mike.  “I don’t think anyone had to wash shorts after that, I think they were all thrown away.”