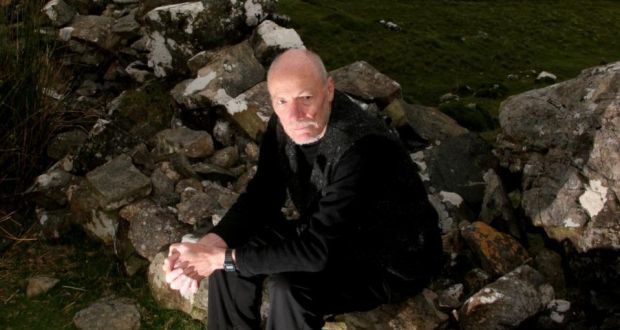 Tim Robinson, the English writer, cartographer, mathematician, artist and illustrator who spent more than 40 years chronicling the west of Ireland, has died in London about two weeks after the death of his wife and collaborator, Mairéad Robinson.

The Cambridge-educated Yorkshire man moved to the Aran islands with his wife in 1972. Over the following decades he documented the cultural, linguistic, botanical, archeological and geological details of the place, creating masterpieces of literature and cartography in the process.

Robinson is best known for his two-volume Stones of Aran (Lilliput Press 1985 and 1995) and his Connemara trilogy – Listening to the Wind (Penguin 2006), The Last Pool of Darkness (Penguin 2008) and A Little Gaelic Kingdom (Penguin 2011). He won the Irish Book Awards literature medal and the Rooney prize special award for literature for his first volume of Stones of Aran: Pilgrimage. He later won two more Irish Book Awards for his Connemara trilogy. Robinson also published a book of essays, My Time in Space (Lilliput Press 1995). His last book, Experiments on Reality, was published in 2019.

In parallel with his writing, Robinson created intricately beautiful maps of the Aran islands, the Burren and Connemara. These richly detailed yet marginalised landscapes he called “the ABC of earth wonders”. His maps were published by Folding Landscapes, the imprint he and Mairéad ran from their home in Roundstone, Co Galway, where they moved in 1984.

Robinson’s writings and map-making were imbued with a layered complexity garnered from walking the land, stopping to talk and listen to local people and from what he called “an infinity of looking” at what he encountered. The English nature writer Robert Macfarlane said few writers succeeded in giving their prose the characteristics of the terrain they were describing as fully as Robinson.

He became a member of Aosdána in 1996 and the Royal Irish Academy in 2011. He was the subject of a documentary, Tim Robinson: Connemara by film-maker Pat Collins in 2011.

Robinson was born in St Albans and grew up one of two sons of Grace (nee Drever) and Frank Robinson in Ilkley, west Yorkshire. His mother designed windows for fashionable London department stores in the 1930s and his father sold engineering equipment. As a child Tim wanted to be both an artist and a mathematician. He realised he could “invent” art without going to art college but he couldn’t “reinvent mathematics”, which he regarded as the highest level of human creativity.

In the 1950s Robinson won a scholarship to study mathematics and physics at the University of Cambridge. After his degree he did his national service with the Royal Air Force as a technician servicing radar devices in Malaya. He met his wife-to-be at the Camden Arts Centre in London, where she was manager. The couple married in 1959 and travelled together, spending time in Istanbul and Vienna before settling in London in 1964. While in Turkey, Robinson taught mathematics and physics at the American College [now Bosphorus University] in Istanbul. In Vienna he painted and exhibited work under the name Timothy Drever. Back in London he worked as a subeditor and technical illustrator to subsidise his work for various art exhibitions.

But after a visit to the Aran islands in summer 1972 – prompted by Mairéad’s viewing of Robert Flaherty’s drama documentary Man of Aran – they decided to return to live there in November 1972.

Robinson said in interviews that their move to the west of Ireland was prompted by “his psychological difficulties navigating the London art world and its demands for money”. He added, “I had the romantic idea that whatever art is, it is the opposite of money, but I forgot that opposites attract”. Much later he viewed his geometrical paintings (which he later donated to the Irish Museum of Modern Art) as the forerunners of his cartography work.

And so the couple abandoned life in London and moved to Inishmore, a Gaeltacht area, with not a word of the Irish language between them. Robinson set about learning Irish, collecting placenames, exploring and writing about the intricacies of the landscape first of the Aran islands and then Connemara and the Burren. He was welcomed into people’s homes to find out the names of fields, hills, rocks and townlands. His first foray into map-making came about when the postmistress asked him to do a tourist map of Inishmore.

Robinson’s meticulous approach to his work has resulted in a rich archive of photographs, placename records, reference books, correspondence with other writers, manuscripts and early drafts and first editions of his books. This archive he donated to the James Hardiman Library at the National University of Ireland in Galway in batches from 2006 to 2014. His writings and cartography have inspired – and continue to inspire – scholarly works in Ireland and abroad.

Speaking at an event celebrating the publication of Connemara and Elsewhere (a 2015 photographic essay by French photographer Nicola Fever inspired by Robinson’s texts on Connemara), Robinson said that he couldn’t have done any of his work without the generous help and advice from NUIG experts in botany, geology and archaeology. “I’ve been in and out of the college so much that I deluded myself [into thinking] that I was a member of staff but I’m an eternal student,” he said. Responding to the appreciation for donating his archives to the university, he responded, “We’d like to leave Connemara with as little as we brought to it – and return everything to Connemara.”

The couple reluctantly moved from their home on the quay in Roundstone to London due to poor health. Robinson, who latterly suffered from Parkinson’s disease, died from Covid-19 in St Pancras Hospital, near his flat in West Hampstead. The long-term plans are to convert the Robinsons’ studio and home in Roundstone, which the couple also bequeathed to NUIG, to an arts centre where their legacy would live on.

You can read the full obituary at https://www.irishtimes.com/life-and-style/people/tim-robinson-obituary-english-writer-who-went-native-in-connemara-1.4225031

Where grass is grass and not cut every month. Where stone is stone and is not polished.

but for the stones

The sense of solitude was immense. I could not see or realise my own body, and I seemed to exist merely in my perception of the waves and of the crying birds, and of the smell of seaweed – JM Sygne, The Aran Islands (1906)

At Jesse’s suggestion, at James’s instigation both, first Jesse, then James, in penumbra urinated, their sides contiguous, their organs of micturition reciprocally rendered invisible by manual circumposition, their gazes, first Jesse’s, then James’s, elevated to the projected luminous and semiluminous shadow.

you lean into me

Contemporary Haiku inspired by Inis Oirr from Anton Kinsella, County Cork. Anton’s Haiku will be weaving their way into the pages of the Inisheer Zibaldone.

Landscape may be said to exist in the eye of the beholder, a beholder who perceives not so much the objective scene as the look of it, the looking at it.

To look back through it along the headlands that stand as if fixed for all eternity, one behind another to the limits of vision, is to look into the jaws of time – Tim Robinson, Stones of Aran: Pilgrimage.

The Zibaldone Project
Blog at WordPress.com.